In this post we will discuss about the basic details/introduction about Apache Pig.

What is Apache Pig?

Pig is a scripting language for exploring huge data sets of size gigabytes or terabytes very easily. Pig provides an engine for executing data flows in parallel on Hadoop. Pig is made up of two things mainly.

The word “Pig” is named after a domestic animal, it is not any acronym. This entertaining nomenclature lead to some silly names in Pig project like Pig Latin for its language and Grunt for its Interactive shell.

Apache Pig is top level project in Apache Software foundation, prior to this it was started by Yahoo researchers and later contributed it to Apache Open source community in 2010.

The Pig architecture is shown in below screen: 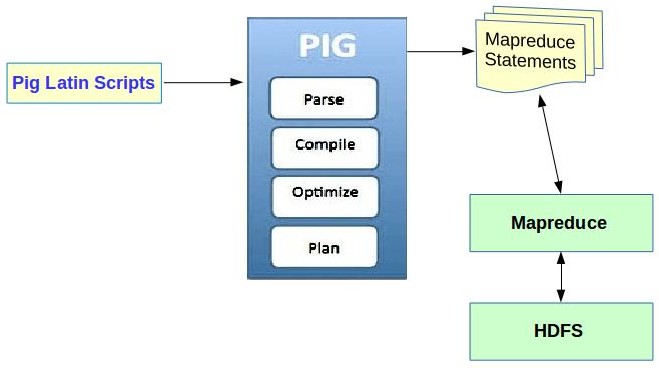 The above picture conveys that,

One of the common use case of Pig is data pipelines. A common example is web companies bring in logs from their web servers, cleansing the data, and pre-computing common aggregates before loading it into their data warehouse. In this case, the data is loaded onto the grid, and then Pig is used to clean out records from bots and records with corrupt data. It is also used to join web event data against user databases so that user cookies can be connected with known user information.

What is the need for Pig when we already have Mapreduce?

Pig Latin provides all of the standard data-processing operations, such as join, filter, group by, order by, union, etc. MapReduce provides the group by operation directly, but order by, filter, projection, join are not provided and must be written by the user.

Difference Between Hive and Pig:

Hive can be treated as competitor for Pig in some cases and Hive also operates on HDFS similar to Pig but there are some significant differences. HiveQL is query language based on SQL but Pig Latin is not a query language. It is data flow scripting language.

Since Pig Latin is procedural, it fits very naturally in the pipeline paradigm. HiveQL on the other hand is declarative.